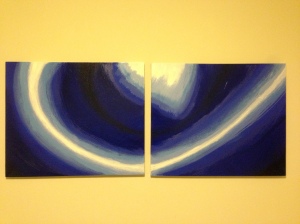 My attempt on shades in oil, a 2 canvas steak in space.

Completed on 12/31/12
A seven canvas depiction of the stages in every couples love story:
-Strangers
-Friends
-Lovers
-Family

so ‘ham is an emphatic form of aham, the first-person pronoun (“I”), translating to “I myself”.[6] Interpreted as a nominal sentence, it can also be read as “It/He is I”. Its use as a mantra emerges in mystical Sanskrit literature of the medieval period. The mantra is sometimes claimed to originate with the Isha Upanishad (verse 16), which ends:

yat te rūpaṃ kalyāṇatamaṃ tat te paśyāmi yo ‘sāv [asau puruṣaḥ] so ‘ham asmi
“The light which is thy fairest form, I see it. I am [that] what He is (viz. the person in the sun)” (trans. Max Müller)[7]

When it applies to a person’s name, according to Vedic philosophy it means identifying oneself with the universe or ultimate reality. Some say that when a child is born it cries Koham-Koham which means Who am I?. That is when the universe replies back Soham. You are the same as I am.. It also stems from the Sanskrit word which means, “self pride.”

When used for meditation, “Soham” acts as a natural mantra to control one’s breathing pattern, to help achieve deep breath, and to gain concentration.